A highly respected attorney who was named Lawyer of the Year in Family Law, Dallas/Ft. Worth by The Best Lawyers in America 2016, Diana S. Friedman has joined her family law practice with that of GoransonBain Ausley’s. Diana shares the core values of GoransonBain Ausley in helping clients make the difficult transition through family law problems in the best way possible.

Diana recognizes that divorce and other family law issues are very personal experiences, so she strives to build comfortable, trusting relationships with her clients. She works with clients to establish goals for their cases, giving them the benefit of her experience in weighing the pros and cons of different courses of action. She advocates tenaciously for her clients both in and outside of the courtroom.  Diana thrives on the connections she makes with clients and the opportunity to provide assistance that really matters in clients’ day-to-day lives as well as their long-term futures.

With an undergraduate degree in business and a background in a family business, Diana excels in cases that involve complex property issues. She brings a cutting-edge knowledge of the law to her clients, and utilizes her creativity in effectively resolving challenging and difficult cases.

Diana is also passionate about working on legislation that will improve divorce laws. She is co-chair of a family law section Legislative Committee that recently secured passage of a bill establishing qualifications for court-appointed child custody evaluators. She believes that working on the front lines of divorce law and being aware of trends helps her better inform her clients and explain the law to them.

Diana has been widely recognized for her expertise in family law. She has been honored as one of the Dallas 500—The Most Powerful Business Leaders in Dallas-Fort Worth 2016. In addition, she has been named to The Best Lawyers in America by Woodward White, Inc.—2010-2021, and to D Magazine Best Lawyers in Dallas—2013, 2015- 2017, among other recognitions. Diana has written numerous articles on family law topics, and she speaks frequently throughout Texas. She and her husband of 26 years enjoy hiking, traveling, and wine. 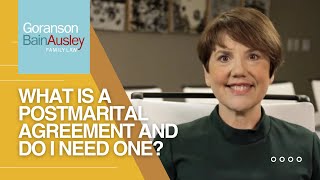 What is a Postmarital Agreement and Do I Need One?

Board Certified in Family Law, Texas Board of Legal Specialization, 1996

Communication with or the transmission of information to GoransonBain Ausley or any of its attorneys via email through this website or otherwise is not confidential and does not constitute or create any type of attorney-client relationship between GoransonBain Ausley or any of its attorneys and any users, senders or recipients. Please do not send us any information or facts relating to your legal matter or question until you have been in communication with one of our attorneys and received authorization to send that information.